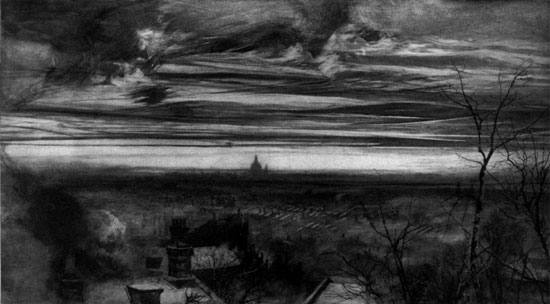 Not a view of London any of us will have seen, though the crowded streets are still there. Saint Paul’s too, miraculously remains, but it has been overshadowed by the temples of Mammon. This picture and text are from ‘London Impressions’ by Alice Meynell, illustrated by William Hyde, pub; Archibald Constable, 1898, available, with images, on Project Gutenberg.

Now and then a firefly strays from the vineyard into the streets of an Italian city, and goes quenched in the light of the shops. The stray and waif from ‘the very country’ that comes to London is a silver-white seed with silken spokes or sails. There is no depth of the deep town that this visitant does not penetrate in August—going in, going far, going through, by virtue of its indescribable gentleness.

The firefly has only a wall to cross, but the shining seed comes a long way, a careless alien but a mighty traveller. Indestructibly fragile, the most delicate of all the visible signs of the breeze, it goes to town, makes light of the capital, sets at nought the thoroughfares and the omnibuses, especially flouts the Park, one may suppose, where it does not grow. It hovers and leaps at about the height of first-floor windows, by many a mile of dull drawing-rooms, a country creature quite unconverted to London and undismayed. This flâneur makes as little of our London as his ancestor made of Chaucer’s.

Sometimes it takes a flight on a stronger wind, and its whiteness shows dark with slight shadow against bright clouds, as the whiter snow-flake also looks dark from its shadow side. Then it comes down in a tumult of flight upon the city. It is a very strong little seed-pod, set with arms, legs, or sails—so ingeniously set that though all grow from the top of the pod their points together make a globe; on these it turns a ‘cart-wheel’ like a human boy—like many boys, in fact, it must overtake on its way through the less respectable of the suburbs—only better. Every limb, itself so fine, is feathered with little plumes that are as thin as autumn spider-webs. Nothing steps so delicately as that seed, or upon such extreme tiptoe. But it does not walk far; the air bears the charges of the wild journey.

Thistle-seeds—if thistle-seeds they be—make few and brief halts, then roll their wheel on the stones for a while, and then the wheel is a-wing again. You encounter them in the country, setting out for town on a south wind, and in London there is not a street they do not recklessly stray along. For they use our arbitrary streets; it does not seem that they make a bee-line over the top of the houses, and cross London thus. They use the streets which they treat so lightly. They conform, for the time, to human courses, and stroll down Bond Street and turn up Piccadilly, and go to the Bank on a long west wind—their strolling being done at a certain height, in moderate mid-air.

They generally travel wildly alone, but now and then you shall see two of them, as you see butterflies go in couples, flitting at leisure at Charing Cross. The extreme ends of their tender plumes have touched and have lightly caught each other. But singly they go by all day, with long rises and long descents as the breeze may sigh, or more quickly on a high level way of theirs. Nothing wilder comes to town—not even the scent of hay on morning winds at market-time in June; for the hay is for cab-horses, and it is at home in the clattering mews, and has a London habit of its own.

White meteor, lost star, bright as a cloud, the seed has many images of its radiant flight. But there is only one thing really like it—the point of light caught by a diamond, with the regular surrounding rays.

Alice Meynell and her husband Wilfrid were the first to publish Francis Thompson’s poetry, and did much to rescue him from his addiction to opium, welcoming him to share their family life. They would surely have said ‘Laudato Si! – Praise him’ – with Pope Francis, as this observation demonstrates. And the seed could have come from a goatsbeard head, like this one from near Elmstead in Kent. Goatsbeard is a very large dandelion. 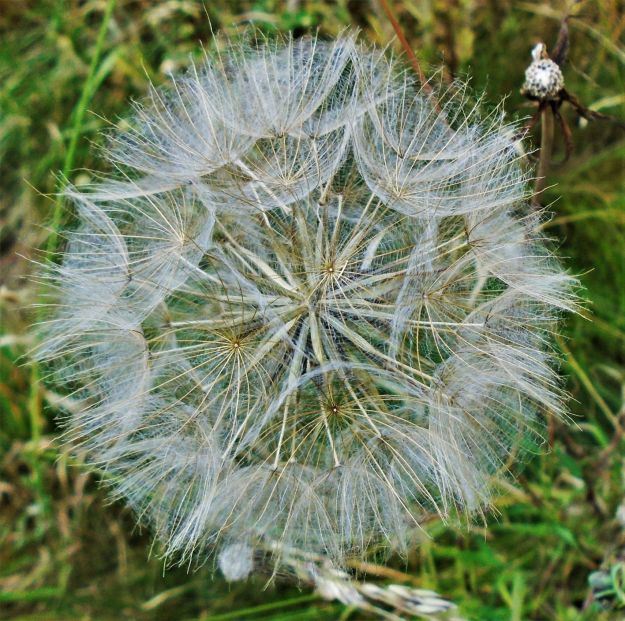