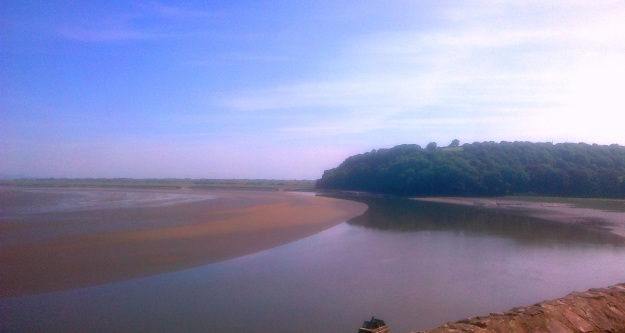 Mrs Turnstone and I find ourselves at the water’s edge in Wales. We should mark Dylan’s Birthday! These are the last three stanza’s of his birthday ‘Poem in October.’ 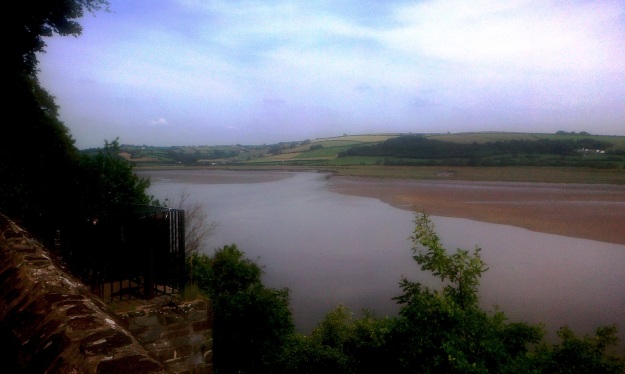 May each one of us find the child’s key to heaven that opened the gate for Dylan that day when he whispered the truth of his joy.

Views of Laugharne, where Dylan walked.

I hope you can listen to Dylan reading the poem here:

Today is Dylan Day. Despite a swell of opinion that Dylan was not a religious writer, I find the evidence points to a deep spiritual awareness and yearning. Here is a taste of why I see many parallels between him and Augustine.

At the end of the fourth century Augustine of Hippo opens his masterpiece, the Confessions, with these words:

‘To praise you is the desire of man, a little piece of your creation. You stir man to take pleasure in praising you, because you have made us for yourself, and our heart is restless until it rests in you.’

1550 years later,  Dylan Thomas, would tell John Davenport that his poetry was written for the love of man and in praise of God; indeed the prologue of his Collected Poems tells how he sought to obey his calling and overcome his fears to:

The poet Kathleen Raine affirms that however chaotic his lifestyle, Dylan’s poetry is ‘holy’, laid out ‘with as much love and care as the lock of hair of a first love’, and confessional, in the double meaning that Augustine intended: a recounting of experience entwined with praise of God: Dylan’s awareness of his work as prayer grew as he matured. His masterpiece, the radio play Under Milk Wood, also opens by invoking Creation, familiar from Genesis and John’s Gospel:

‘To begin at the Beginning:

It is spring, moonless night in the small town, starless and bible-black.’

Here are two books written by men in mid-life, although Under Milk Wood would be Dylan’s last work. This is the story of a community of people like him, saints who are sinners, a Welsh City of God, funnier and warmer than Augustine’s version. Sadly we mortals may not yet linger there.

Dylan had seen Llareggub builded here, in Wales, the Chosen Land. It is no mean city, although it is little, like Wales, and like Wales, or the Churches of John’s Revelation, it is on earth as it is in heaven. Dylan was nurtured at the same source as Augustiine; if philosophy opened the wells for the bishop, poetry released for the ‘spinning man’ a flood to float his cockleshell ark, and, we may hope that ‘the flood flowers now’ for him, beyond the ‘breakneck of rocks’ of his life.

Yesterday’s storm sent me darting outside to check that the roof was draining properly with no blocked gutters. At the back of the house I found a cascade where the downpipe and gutters were full to capacity and more; thankfully it did not last long, and the weather turned around; today as Dylan wrote

Yes, the year is turning round: these are the last strawberries, said the greengrocer at the Goods Shed, and so, remembering next week’s Harvest Festival, I came home to harvest the more presentable grapes that have not gone to feed the starlings and blackbirds.

I was reminded, in this month of the centenary of his birth, of Dylan’s Poem in Autumn, sharing with us his walk through the little town, the weather turning, his mind and heart turning to celebration and prayer, out on the hill.

Let us be grateful for the last strawberries, for the grapes and all the harvest and for the birds who bring us pleasure even as we pretend to be cross with their depredations. We’ll be feeding them through the winter!

A few weeks ago, digging in the back garden, I turned up a small toy cat, what my daughters used to call a China animal. Friday by Friday, each of them collected a set of dragons, ducks, horses or cats from a tiny shop near where I worked, each animal brought home in its own tiny paper bag. At 10p apiece they provided hours of imaginative play. When the girls saw this relic of their childhood there were gasps of delighted recognition. 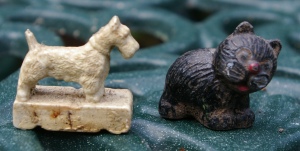 Delight, but puzzled delight for us when the good people from Regency Floors brought us a white Scottie dog found wedged between the floorboards they were renovating. None of us recognised him: a Monopoly counter perhaps, but not one we had ever played with.

At Dylan Thomas’s Boathouse in Laugharne/Llarregub a cabinet displayed half a dozen toys unearthed in the garden, including a Dinky  car like one my cousin Anthony used to let me play with. Good to think of those children playing in the garden: the toys a concrete reminder that A Child’s Christmas in Wales would have been blessed, even with little by way of material things, as ours were in Birmingham.

Domestic archaeology, unearthing happiness! Dylan praised Laugharne/Llarregub for its smallness in a small land, smiling under the Principality of the Sky. Delight is beyond measure, a tree from a mustard seed.

Tranquillity is not the state that springs to mind when Dylan Thomas is mentioned. He seems to have been fleeing tranquillity even while desperate to find it, like another addictive poet, Francis Thompson, pursued by The Hound of Heaven:

I dimly guess what Time in mists confounds;

Yet ever and anon a trumpet sounds

From the hid battlements of Eternity;

Those shaken mists a space unsettle, then

But not ere him who summoneth

I first have seen, enwound

His name I know and what his trumpet saith…

For his part, Dylan admits the fear that Thompson describes; he acknowledges the fear-bred anger, and flees in an ark of roaring poetry, commandeering for his heart the boat that Noah entrusted to the waters when the flood washed against his home. Fear and anger ­­– such emotions show that a man is alive, that the spring or fountainhead of being bubbles up inside him.

Hark: I trumpet the place,

From fish to jumping hill! Look:

I build my bellowing ark

Dylan may mock his little town in the very naming of it, but he loves it, seizing the angelic trumpet to celebrate it. And he sees God not through the fog, but in ‘the close and holy darkness’ about the town; a loving presence ‘All through the Night’.

We came to Laugharne last week, saw how cramped the Boathouse had been for the poet’s family, how far from tranquil it must have been on a wet winter’s afternoon with the children running bored around his feet. We looked into Dylan’s little writing shed along the path and out through the windows about his writing desk. Here, on a golden summer’s day, it is easy to believe that Wales, including Laugharne-Llaregub, is a tranquil ‘God-built garden’. It smelt of marjoram, mint and salty mud.

There was an old television programme showing in the upper room, which dismissed the notion that Dylan’s poetry was religious, but claimed he celebrated life. He did that; indeed he did, but Milk Wood and the Prologue to his collected poems are the religious works of a reluctant saint, trying against himself to be, or not to be, a sinner. Ask St Augustine; ask Kathleen Raine; ask Rowan Williams. 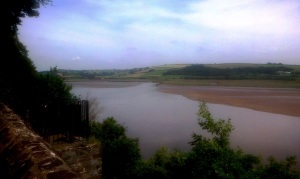 Not yet have we heard the first cuckoo of Spring, but even so: the first local strawberries, tastier than Spanish imports; the first rose of summer, sprung in time to welcome St George, though neither white nor red factions would have worn the yellow Mermaid in their lapels, no doubt deeming it more patriotic to boast imports from Ecuador in their tribal colour; the first clamouring baby blackbirds and magpies in different neighbours’ gardens – though not in ours which is still a building site; cow parsley everywhere, even on the altar at church; the first cut of what grass remains in the Turnstone garden; so it is time to say, with the Welsh poet,

And all things glad and beautiful. W.H.Davies.

Davies gives us a reminder that St David on his deathbed urged the people of Wales to be faithful to the little things; WHD is by no means the only Welsh poet to live up to this command. Dylan celebrated small town life Under Milk Wood.

One little thing leapt out at me the other morning: I walked round the corner to find that the back garden wall is a mass of purple wall-toadflax. A few years ago we were at St David’s Cathedral, where the boundary wall carries a thriving colony of a white variety of this beautiful little thing. I hope no zealous tidier-up of unconsidered trifles ever weeds them all away. The Turnstone toadflax can rest easy. Even if Mrs Turnstone does turn her hand to repointing our wall, there will always be a crack for a seed to take root and start the colony again. 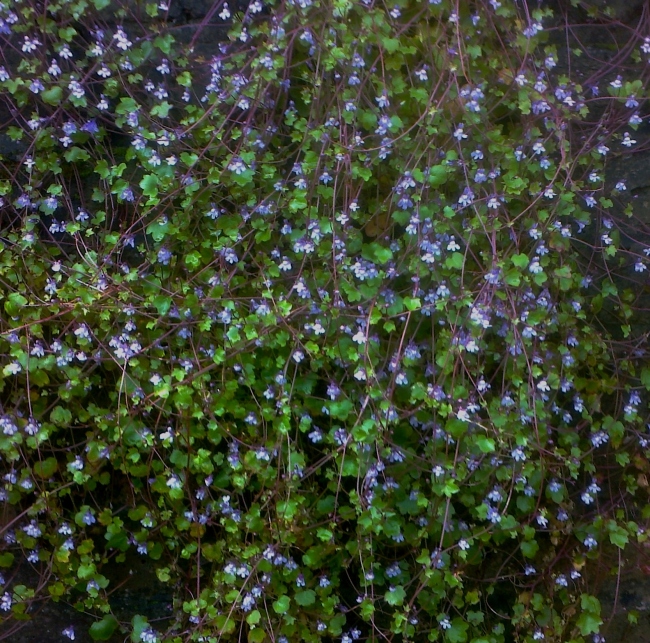