It was the ash trees that set us talking: we were looking for signs of die-back disease, which is in Kent, and cannot be kept from the trees at the Glebe. So far, so good, but V reckoned on a further ten years before we know whether any of ours will be the ones to preserve the species into the twenty-second century.

Naturally we slipped into talking of the elms, still around in our boyhoods. ‘You’ll have to go to Brighton to see a good specimen now’, said V, ‘and they are pumped full of fungicide’. He told me they grow from suckers in hedgerows elsewhere, but once they approach maturity, the beetles find them, bringing the Dutch Elm Disease fungus with them.

A useful tree, we agreed, as well as beautiful. I recalled seeing pipes made from elm, even in the iron-founding Taff valley in South Wales. Perhaps the wood was more flexible, less likely to crack, than cast iron.

Then, what should I see beside the level crossing in Canterbury, but these carved elm gutters, fallen, I guess, from the back of a lorry. How old are they, I wonder? From the smooth channels and the splintered ends, they look as though they would have been good for a few more years’ service when they were hacked up.

A meal in the garden in the company of friends is a great blessing, one Mrs T and I shared this week in Wales. Good local food well cooked. Our friend’s granddaughter has a chef for a brother and seems to share his love for cooking – one passed down the generations!

There was talk of the brother as well, of course, of cabbages and kings. The lad takes a pride in his work, to the extent that he has persuaded his bosses to buy butcher’s meat and fresh fruit and vegetables so that he could prepare better meals at no extra cost. He is feeding young people on activity holidays.

‘And now, instead of frozen, ground down whatever and jars of sauce, they have spaghetti Bolognese with proper, lean minced beef and sauce from scratch.’

I hope you enjoy a few outdoor meals this summer, and that the cooks enjoy them as well as the diners. The next day was bread and cheese for just the two of us, halfway up a hill in Herefordshire. That was enjoyable too: we’d walked up an appetite!

There are hills and hills of course. Saint Thomas’s Hill is on the rim of the dish that cradles the city. Most cyclists seem to dismount to climb up it, but coming down is another matter; I think that qualifies as a hill. For the last fifty years it has housed the University of Kent, not visible in this winter’s picture.

Indeed I’ve deliberately shown this ‘temporary’ car park in all its glory to stress the point brought home to me as I turned this corner the other day – without my phone of course, so I could not recapture that careless rapture. Here the panel of parking regulations, the hastily spread asphalt  and the scrubby edges of the car park impel the walker to pass by on the other side as quickly as possible.

I walk this way nearly every day,  eyes averted.

Between where we stand and those whitewashed cottages a footpath takes a short tunnel under the railway; then to the left of the cottages and to the playing field behind the tall trees; a not unpleasant walk. From there the hilltop is covered in university buildings; from here neither they nor the post-war houses across the field make much impact.

There’s no way you could imagine yourself in the Kentish countryside, but look up! There is a hill, there are trees, there is hope. Even if the developers would happily sacrifice the trees on the altar of Mammon. This car park has never been built upon. It used to be an allotment garden, gone wild before we came, but good for raspberries, brambles, lizards and slow-worms. A sustained effort was made to rescue the reptiles, now safely rehoused on reclaimed land elsewhere. But this land will be built on. People need homes too.

But what struck me the other day as I walked home?

A hint of sun on the hill, made the grass, and the young stems of the trees – there are plenty of willow in yellow and red – shine against the black of their trunks and branches. It was a Psalm 121 moment – I will lift up mine eyes unto the hills, from whence cometh my help.

A spring in my step, though nothing material had changed. The car park, graffiti and the intrusive buildings were still there, but look beyond!

The window looks out onto real hills, the Black Mountains of South Wales.

Mrs Turnstone and I find ourselves at the water’s edge in Wales. We should mark Dylan’s Birthday! These are the last three stanza’s of his birthday ‘Poem in October.’

May each one of us find the child’s key to heaven that opened the gate for Dylan that day when he whispered the truth of his joy.

Views of Laugharne, where Dylan walked.

I hope you can listen to Dylan reading the poem here: 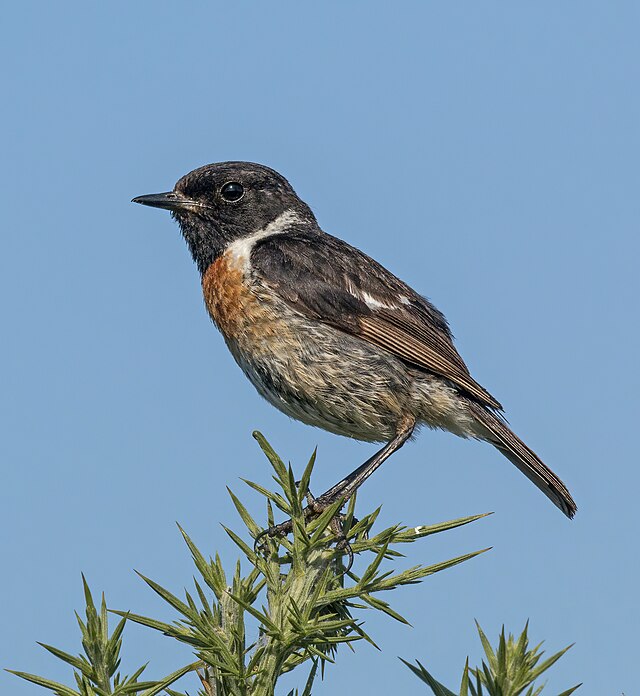 The scattering of white feathers showed where a black-headed gull had been killed; the corpse lay a couple of feet away, the breast picked almost clean by the second bird, the sparrowhawk who has become quite familiar in this part of town. Satisfied with its meal, it had flown away already.

The third bird was totally unconcerned by this drama, and a real surprise on Abbot’s Hill. Sitting on a stump nearby: a smart, robin-like creature which was indeed a stonechat. I don’t recall seeing one locally before but he was singing as if he owned the place and had no intention of going west to the old brown hills. I feel sure he will though.

Today is Dylan Day. Despite a swell of opinion that Dylan was not a religious writer, I find the evidence points to a deep spiritual awareness and yearning. Here is a taste of why I see many parallels between him and Augustine.

At the end of the fourth century Augustine of Hippo opens his masterpiece, the Confessions, with these words:

‘To praise you is the desire of man, a little piece of your creation. You stir man to take pleasure in praising you, because you have made us for yourself, and our heart is restless until it rests in you.’

1550 years later,  Dylan Thomas, would tell John Davenport that his poetry was written for the love of man and in praise of God; indeed the prologue of his Collected Poems tells how he sought to obey his calling and overcome his fears to:

The poet Kathleen Raine affirms that however chaotic his lifestyle, Dylan’s poetry is ‘holy’, laid out ‘with as much love and care as the lock of hair of a first love’, and confessional, in the double meaning that Augustine intended: a recounting of experience entwined with praise of God: Dylan’s awareness of his work as prayer grew as he matured. His masterpiece, the radio play Under Milk Wood, also opens by invoking Creation, familiar from Genesis and John’s Gospel:

‘To begin at the Beginning:

It is spring, moonless night in the small town, starless and bible-black.’

Here are two books written by men in mid-life, although Under Milk Wood would be Dylan’s last work. This is the story of a community of people like him, saints who are sinners, a Welsh City of God, funnier and warmer than Augustine’s version. Sadly we mortals may not yet linger there.

Dylan had seen Llareggub builded here, in Wales, the Chosen Land. It is no mean city, although it is little, like Wales, and like Wales, or the Churches of John’s Revelation, it is on earth as it is in heaven. Dylan was nurtured at the same source as Augustiine; if philosophy opened the wells for the bishop, poetry released for the ‘spinning man’ a flood to float his cockleshell ark, and, we may hope that ‘the flood flowers now’ for him, beyond the ‘breakneck of rocks’ of his life.

Talking as we were of ravens, we saw a full set of crows in Anglesey and Caernarfon: Raven, rook, carrion crow, jay, jackdaw, and the inescapable magpie, as well as the choughs around South Stack. Carrion crows, as in Kent, fancy themselves as waders, and ravens seem to like the beach as well; choughs and jackdaws enjoy the wind, as if having fun in the air is what they were created for. There won’t be so much time to play in a week or two, when breeding really gets going!

Lunch with the cuckoo was special enough, but I had arrived at the Goods Shed just as Enzo was taking the bread from the oven. My loaf was wrapped in a flash and straight in my bag. Back home, I spread it with wild garlic pesto, tomato paste, cheese and olives. Satisfying!

Mrs Turnstone is trying to grow some in a shady part of our garden, thanks to a gift from a friend. We’ve allowed ourselves no more than a couple of leaves for salad this year, hoping the patch will spread.

We crossed the Britannia Bridge to stay near the Menai Straits, with views across to Snowdonia: well named on our arrival as the tops were white. We enjoyed four seasons in a week. The first weather to impose itself was the wind, sweeping across the island from East to West, blowing NAIB into my arms as we climbed the steps to Our Lady Star of the Sea in Amlwch. Later in the week rain did not prevent her joining the old folks across the Menai Bridge in Caernarfon while G studied.

Telford’s Menai Suspension Bridge is older, built in 1826 for the Irish Mail Coaches to Holyhead, and strengthened since to take modern traffic. Stephenson’s Britannia Bridge was built in 1850 for the Railway, but vandals destroyed the track and the iron tubes carrying it. The piers remain, with a new road and rail bridge built between them in 1970. We were pleased to cross them both!

The evening sun shone when these pictures were taken, full on the Menai Bridge but, seen from the East, shining through to emphasise the grace of the 1970 structure between the Britannia’s piers.

A week across the border with Mrs T, NAIB and HDGB: the students preparing to finish their courses deserved a reading week on Anglesey, Ynys Môn. Peace among the daffodils to gather thoughts onto paper or disc.

The sun shone and we sat out of doors with our coffee. A call drew eyes to the sky where six big birds circled on the thermals. ‘Buzzards’, suggested HDGB, but no buzzard ever barked like that. ‘Ravens’, I asserted.

The species are similar in size, both have fingered ends to their wings, though their tails differ. As we watched, it became clear that neither of our identifications was wrong. A pair of buzzards were being attacked in mid-air and sent packing by the ravens, swooping in and pecking the hawks’ wingtips.

We once witnessed a similar display over our heads in Kent, when rooks were asserting their territorial rights. This time the buzzards soared back towards the mainland as the sun’s brightness took them from our sight.

Will Turnstone
Blog at WordPress.com.